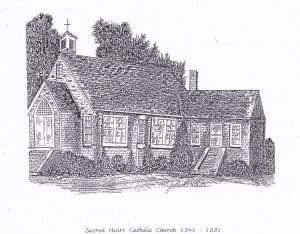 Catholicism first came to the Cape Fear Region nearly 500 years ago, when a Spanish expedition’s flagship sank in the Cape Fear River.  No lives were lost and masses were offered in thanksgiving.

The first formal Catholic presence in the region was 1820 when an Irish immigrant, Bishop England, became Vicar of Charleston, SC.  He instituted missionary services to Ft. Johnston and Caswell.  Father Murphy was appointed (several years later) to Fayettsville & had jurisdiction over all of Eastern NC. He moved to Wilmington in 1846 and begun a regular schedule of services until his death in 1862. Other Priests followed & ministered to our own forts and Smith Island (known as Bald Head Island today).

Sacred Heart Church was dedicated in 1941 after the construction on the site (donated by Mr. James “Gus” McNeil) located on the corner of Caswell & West Streets.

Sometime in 1962 the Parish Hall was built and we acquired our very first full-time pastor, Father Kendall. 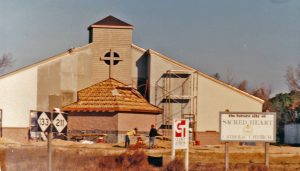 At this time the parish consisted of approximately 20 families.

March 17, 1991 the original church on Dosher CutOff  Rd was dedicated, at which time there were approximately 300 families in membership.  ~ exerts taken from Sandy (Potter) Spencer’s account in  2003.

Our current church was dedicated in the fourth quarter of 2003, approximately  18 months after the groundbreaking ceremony in April 2002.   Those parishioners that were here during this period of expansion would gladly show you which part of the church is that of the original 1991 structure  from the outside or from the inside.  The original 1991 structure is what is now the all purpose room area and more.  Our 2003 church is very distinguishable particularly from the inside, with its beautiful beamed wooden ceiling to the incredible statues and stain glass.  We remind ourselves that the church is the people of whom have gathered together in worship. Come worship with us!