The Columbarium and Garden are outside the Church, through a door on the left side of the Gathering area. A statue of an Angel watches over its four vaults, with a total of 250 niches, each niche is able to hold two urns.

Statue of the Madonna Della Strada (Our Lady of the Way)

(in the courtyard at the rear of the Church, from Italy by Ferruzzi) 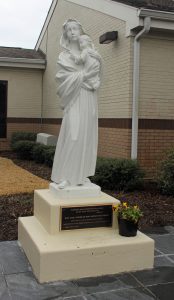 Whoever Welcomes One Such Child in My Name Welcomes Me Mary Mother of God, Protect the Unborn
Dedicated in Loving Memory of the Unborn
Sacred Heart of Southport Knights of Columbus Council #12537

Statues in the Day Chapel 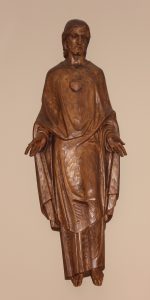 The Sacred Heart of Jesus

These Statues were initially placed in the original Catholic Church located in downtown Southport.

Stations of the Cross in the Day Chapel 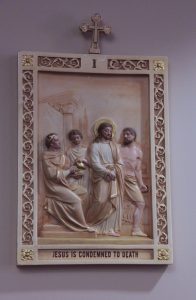 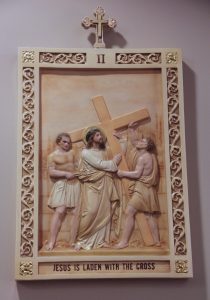 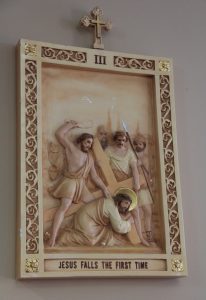 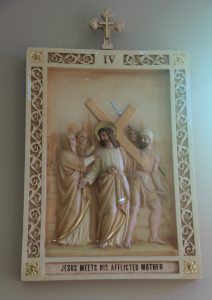 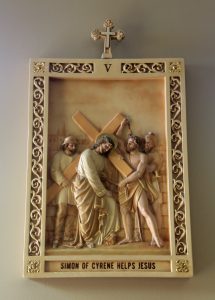 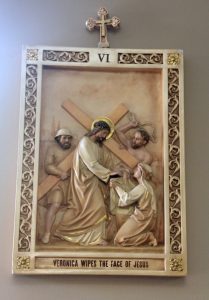 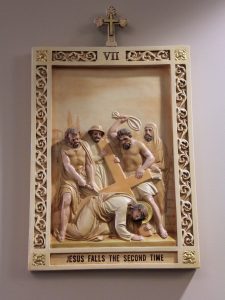 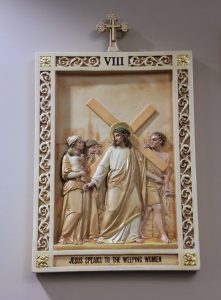 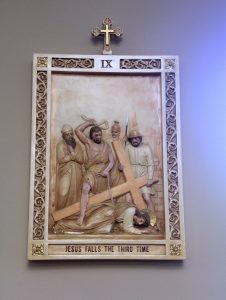 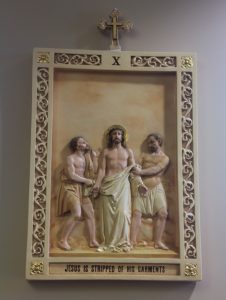 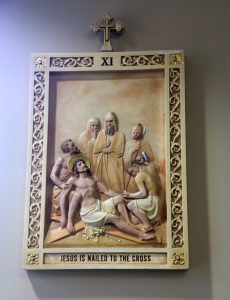 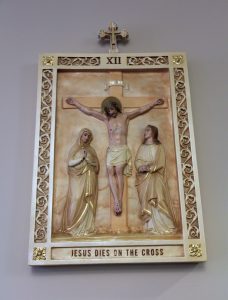 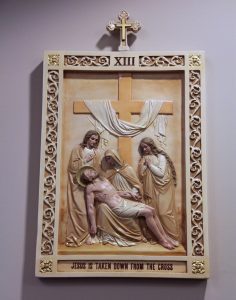 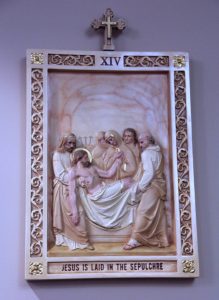 Statues in the Sanctuary

(Hand-carved in Italy from lindenwood) 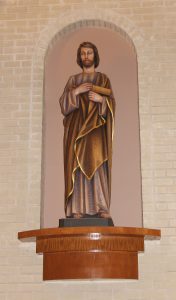 St. Joseph (front left)
St. Joseph was the husband of Mary and the foster father of Jesus. He was a carpenter who, despite his humble means, was a descendant of David, the greatest king of Israel. 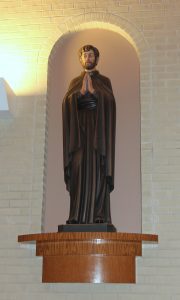 St. Isaac Jogues (left side front)
St. Jogues was one of the heroic Jesuit missionaries canonized as the Martyrs of North America in 1930. From 1636 he worked successfully with the Hurons in Quebec. In 1642 he was imprisoned and tortured for a year by the Iroquois, then captured by the Mohawks & beheaded in 1646.
(Source: The Wisdom of the Saints—Biographical Notes) 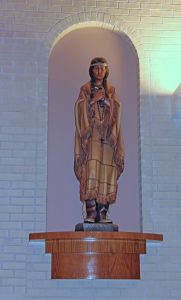 St. Kateri Tekakwitha (left side back)
Kateri was born in 1656 of an Algonquin mother and a Mohawk chief in the Mohawk village of Canaouaga (now Auriesville) in upstate New York.
At age 19, she converted to Catholicism, taking a vow of chastity and pledging to marry only Jesus Christ. Her decision was very unpopular and some of her neighbors started rumors of sorcery. To avoid persecution, she traveled to the Mission of St. Francis Xavier, a settlement of Christian Indians in Canada. While there, Kateri taught prayers to children and worked with the elderly and sick. She was known for her great devotion to the Blessed Sacrament and to the Cross of Christ. She died of smallpox on April 17, 1680, at age 24. She became the first Native American Saint in the United Stated on October 21, 2012.
(Source: http://www.katerishrine.com/kateri.html) 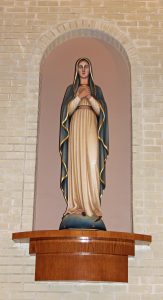 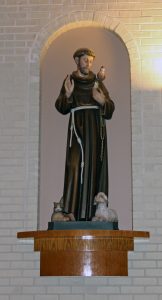 St. Francis of Assisi (right side front)
The most universally known and beloved of all saints, Francis was born to a wealthy silk merchant. He spent his youth in pursuit of pleasure and glory in war and had an idealized, chivalric image. He was captured in battle, imprisoned and suffered a serous illness which changed his temperament. He had compelling visions of Christ and began to devote his life to serving the sick and poor. After a break from his father, Francis turned to a life of absolute poverty and simplicity, wandering through the world calling all to the practice of charity and penance. In 1224 he received the stigmata, the five wounds of the crucified Christ.
(Source: The Wisdom of the Saints—Biographical Notes) 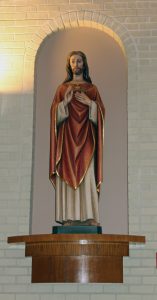 Sacred Heart of Jesus (right side back)